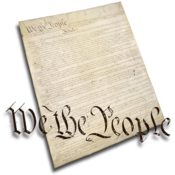 The Economist’s December 17th article The faith (and doubts) of our fathers was the most nuanced and accurate an article on the subject as I have seen.

The “founding fathers” did not speak with one voice. I love this quote: “They did not spend their time producing pearls of unanimously agreed wisdom.” Their quarrels were as bitter as those today.

There was broad consensus for the federal government to be secular. In modern days this should be the natural reaction to non-secular, Islamist governments. Of the founders their broad-based revulsion of the fusion of religious and political power was epitomized by ancient monarchies.

Less understood now is this “wall of separation” (Jefferson’s words) applied only to the federal government. State and local governments continued to provide overt support and sponsorship of religious activities. This was the compromise that achieved such broad consensus. In a law of unintended consequences, the fight to continue slavery led to the demise of this compromise. Constitutional Amendment XIII, “Slavery and Involuntary Servitude” ratified December 6, 1865, reads:

Section 1. Neither slavery nor involuntary servitude, except as a punishment for crime whereof the party shall have been duly convicted, shall exist within the United States, or any place subject to their jurisdiction.

Section 2. Congress shall have power to enforce this article by appropriate legislation.

When several confederate states fought implementation with their own state constitutional amendments, Amendment XIV, “Rights Guaranteed: Privileges and Immunities of Citizenship, Due Process, and Equal Protection”, was ratified on July 9, 1968.

Thus states were prevented from maintaining the firewall between racial slaves and the Bill of Rights. They were also forced to erect a “wall of separation” between state governments and religious institutions.

I don’t wish to argue whether this was right, and I am not qualified to argue the finer points of this wall of separation. It exists regardless of the intent of the founders. Some would have welcomed it, and many would have abhorred it.

It isn’t clear how much of modern-day US would decay into sectarian violence lacking these protections. What’s clear is we don’t want to find out. Religious belief in the US thrives like in no other modern democracy. That should be good enough.