I realized in my previous post I neglected one topic: water.

Prior to the trip I believed it was better to bring up (and down) too much water than not enough.

I have changed my mind for two reasons. Water is heavy. And water or other liquids can easily be purchased along the route.

The two of us carried 2 x 2L bottled water, 2 x 1L bottles filtered tap-water, and 2 x 500mL bottles of amino water (tastes like a sports drink). This was a total of 3.5L per person.

We drank about 2.5L per person and returned with one of the 2L bottled water unopened. Cleaning up today I realized how much extra weight I carried around, and my shoulders felt it.

We found the amino water more refreshing and drinkable than the pure water. However, I would feel uncomfortable without some pure water. Most hikers can safely get away 2L per person. If you find you are consuming more, you can easily purchase more anywhere along the trail, including the summit.

However, be careful on the descent, because there are fewer shops along the descending trail.

Below is a non-Flash version of our experience.

EveryTrail – Find hiking trails in California and beyond

My son and I successfully completed our hike up Mt. Fuji this weekend. After a day of recovery I am now ready to share a few pearls of wisdom.

Hiking in this location is more difficult than other hikes around Japan, due to a combination of a) steep incline, b) thin atmosphere, and c) slippery footing. The thin atmosphere can cause altitude sickness (高山病), which may include headaches and chest pains in heart and lungs. The cans of compressed oxygen are reported to help here, though i didn’t use one on either trip up Fuji-san. A bottle of ibuprofen or paracetamol should be carried for headaches.

The slippery footing does slow your walking speed and increases effort to climb. On the way down it can cause treacherous footwork and falls. I stumbled several times and fell once. I found it best to keep the knees bent and shift weight load to the hiking poles. The quads were very store a day later, however.

The hike mostly went according our revised plan. We needed about 6 hours to get from 5th Station (５合目) to 8th Station (８合目) Fujisan Hotel. We needed another 3 hours to the summit (頂上). Going up took longer than expected, but the descent took about 4.5 hours, as expected. You will be delayed by frequent rest breaks and traffic choke points at several points along the trails, particularly at the hotels and near the (non-free) restrooms. There are fewer choke points during the descent.

I originally planned for a one-day trip (日帰り). In retrospect this was unrealistic for an 11 year old. A hotel stay around stations 8 or 9 was very refreshing. I was impressed with the efficiency that Fujisan Hotel getting you in and out. The staff were helpful and friendly. I would avoid the meals, if possible.

Unless you really need to see the sunrise from the top of Mt. Fuji, I would avoid. This is the most heavily trafficked period on the mountain. We woke up at 1am to catch the sunrise, but I would have preferred to sleep in a few more hours and avoid the crowds. Similarly I would avoid the Subaru Line / Yoshida Route for the same reason. However, the Subashiri Route converges at 8.

The entire Fuji-san experience is much more crowded and commercialized now than I recall 15 years ago. There are frequent hotels and shops along the trail, including at the summit. These detract from the experience, because they are eyesores and because they create traffic choke points.

My son said insists he never wants to do that again. Unless my daughter demands company up her own Fuji-san hiking experience, I do not plan to do it again either. Twice is exactly once too many. 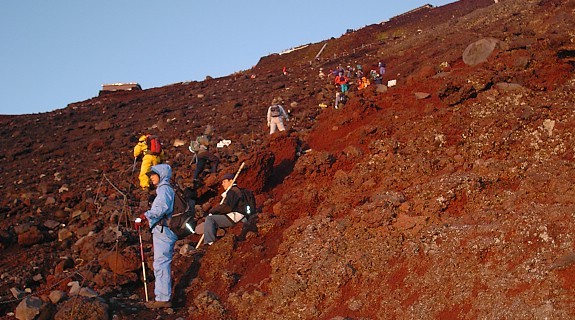 Updated 7/25: My son and I are planning to climb Fuji-san late next week. I climbed once about 15 years ago. This time is for the kids (one of them anyway).

I thought I finished planning this morning, and I reserved the bus from Shinjuku, in a day trip that would get us home by midnight. However, further discussions have nixed these plans:

We will arrive at Station 5 on Friday 8/3 around noon on the Keio Dentstsu Bus from Shinjuku. After getting some food and adjusting to altitude for 1-2 hours, we will head up to Station 8. We booked 2 spots at the Fujisan Hotel so we can rest for a few hours and, if necessary, escape the rain. Two hours before sunrise we will hike the remaining 1.5 hours to the peak.

If all goes well we will descend Saturday morning to Station 5 and catch the 11:00am bus to Shinjuku. We will be home by Saturday afternoon.

We are preparing at least the following:

Please let me know if you have any further advice or recommendations.